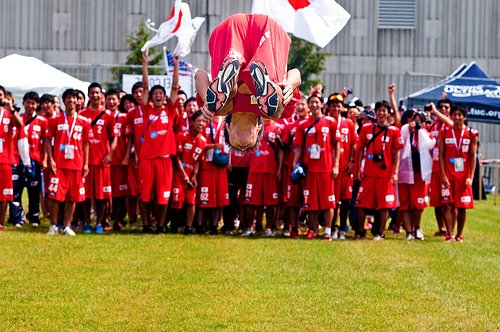 The warm, sunny weather was perfect for the opening ceremonies and kickoff showcase game on Sunday afternoon.  First nation dancers lead the 36 teams representing countries from around the world into the opening ceremonies.  The players’ enthusiasm was particularly well highlighted by the gymnastic talents displayed by the Japanese player who, instead of walking in, entered the ceremonies with backhand springs.

Zuluru To Provide Online Scheduling, Scoring and Roster Management for the World Under-23 Championship Event

We are very pleased to announce that Zuluru has been selected as the Official provider of online scheduling, scoring and roster management for the Championships 2013, happening in Toronto, July 21-28, 2013. The U23 site is already hosted by Zuluru.net, and this agreement is a natural extension of that. Throughout the during of the tournament Zuluru will provide up to date information on schedules, results and real time stat tracking for all divisions of play.

Zuluru is already in use by half a dozen Ultimate organizations across Canada, who will all benefit from the new features being developed to support this international event. We look forward to welcoming visitors from around the world, whether in person or online, and will do all we can to provide timely and accurate information for players and their fans.

The U23 World Ultimate Championships and NGN are teaming up to bring you weeklong LIVE coverage of the best under-23 ultimate athletes from around the world. NGN will be broadcasting 15 games from this year’s event including the finals in all three divisions.

NGN is the world online broadcast leader for the sport of ultimate and will be bringing with them their trademark coverage including expert commentary, multiple camera angles and instant replays.

NGN will kick off coverage of the U23 World Ultimate Championships with a free live broadcast immediately following the opening ceremonies on Sunday, July 21. Subscriptions to the remaining games will be available online at www.ngnultimate.com for $5 each or $25 for the entire week.

On behalf of the Tournament Organizing Committee, we are thrilled to welcome Steam Whistle Pilsner as the Official Beer Partner for the U23 Championships!

Steam Whistle is known as Canada’s premium pilsner and is brewed independently in the heart of Toronto, at the historic Roundhouse on John Street which is just south of the CN Tower. The Brewery hosts and supports events, green initiatives, local artists, and of course the sport of Ultimate! Steam Whistle has been a great supporter of the Toronto Ultimate Club and its members since 2008. More than anything, Steam Whistle beer is REALLY good. Check them out: 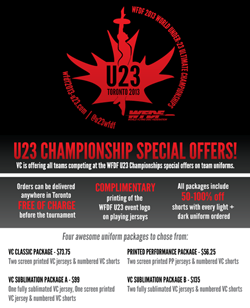 The U23 Tournament Organizing Committee is proud to announce VC Ultimate as the Official merchandise supplier and a presenting sponsor for the WFDF 2013 World Under-23 Ultimate Championships being held in Toronto July 22 – 28, 2013.

The WFDF Ultimate Rules Sub-Committee is pleased to release an updated version of the WFDF Rules of Ultimate for 2013.

This version will come into effect as of 1 January 2013.  A number of changes have been made which are aimed at producing a better flow of play, fairer outcomes, a closer alignment with the USAU rules, as well as enabling self-refereed play to work as effectively as possible.

The World Will Be Coming To Toronto 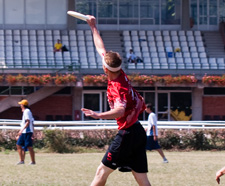 Toronto, February 1, 2012 – The Toronto Ultimate Club (TUC) is pleased to announce that it will host the World Flying Disc Federation's Under-23 Ultimate Championships in 2013. This prestigious Ultimate Frisbee event will be held at York University from July 22 - 28, 2013.